JT: The European Commission and the European Parliament have drafted reports and adopted resolutions which draw attention to poor detention conditions which may obstruct mutual trust and efficient judicial cooperation between the various Member States.
The conditions of confinement are the object of consistent criticism at the European Court of Human Rights and compensation claims by prisoners are proving costly; in yet others, community alternatives are being introduced widely (often in association with electronic monitoring); in yet others, short sentences are no longer attracting a custodial disposal.

Despite the limitations that result from the EU treaties in the justice arena, how can EC-led policies contribute to the development and modernization of such a diversity of European prison and probation systems?

VJ: The monitoring of detention conditions and prison management are primarily the responsibility of Member States. So far, there is no EU legislation in this area.

However, poor detention conditions can hamper the efficient operation of EU mutual recognition instruments, such as the European arrest warrant (EAW), as was recently recognised expressly by the Court of Justice of the EU in the Aranyosi/Caldararu case.

The Court held that the execution of an EAW must be deferred or eventually brought to an end if there is a real risk of inhuman or degrading treatment because of the conditions of detention of the person concerned in the Member State where the warrant was issued.

As a result more coordination between the Member States might be needed in particular as regards the information which will be made available on detention conditions and that common indicators might need to be developed to assess in a uniform way whether a real risk of inhuman or degrading treatment within the meaning of Article 4 of the EU Charter of Fundamental Rights exists.

I also support cooperation with the Council of Europe, which has a large experience in the area of detention and in promoting more human and socially effective prisons.

In 2016, the European Commission provided a grant to the Council of Europe for the setting up of an EU Network of national prison monitoring bodies (National preventive mechanisms).

It allows bodies monitoring prisons in the Member States to meet regularly within an informal network to discuss detention matters and exchange best practice in this field and to focus on EU specific issues such as the operation of the EU Framework Decision 2008/909/JHA on the Transfer of Prisoners and the EAW.
The Commission also encourages the networking and exchange of best practices of prison and probation organisations through our yearly operating grants to EuroPris and the European Organisation of Probation (CEP) and through numerous action grants which are dedicated to detention-related projects.

JT: The Council Framework Decisions 2008/909/JHA (on the application, between Member States of the European Union, of the principle of mutual recognition to decisions on supervision measures as an alternative to provisional detention); 2009/829/JHA (concerning custodial sentences or measures involving deprivation of liberty) and 2008/947/JHA (on the application of the principle of mutual recognition to judgments and probation decisions with a view to the supervision of probation measures and alternative sanctions) are considered major achievements at the European scale.

How would you describe the implementation of the referred Council decisions so far? What are the main challenges to overcome?

VJ: Today, nearly all Member States have implemented those Framework Decisions. The Commission is currently communicating with those who have not done so yet and will take steps to ensure that all Member States comply with the EU Framework.

The European Commission has organised numerous experts meetings to assist the Member States in the task of implementing the Framework Decisions into their national law. Since a number of years we organise, in close cooperation with EuroPris and the European Confederation on Probation (CEP), yearly workshops allowing the competent authorities to discuss any issues that might arise in the context of the practical application of the Framework Decisions. Currently, we are also working on a Commission Handbook on FD 2008/909/JHA on the Transfer of Prisoners.

Implementation of those instruments is important as they have the potential to lead to a reduction in prison sentences imposed by judges to non-residents. This could not only reduce prison overcrowding and thereby improve detention conditions but also – as a consequence – allow for considerable savings for the budgets spent by the Member States on prisons.

“The Commission encourages the
networking and exchange of best practices of
prison and probation organisations through
our yearly operating grants to EuroPris and
the European Organisation of Probation (CEP)
and through numerous action grants which
are dedicated to detention-related projects.”

JT: The tragic events occurred in different European cities have raised the attention to the phenomenon of radicalisation risk in prisons.
Reports refer that poor prison living conditions, overcrowding, limited staffing and the presence of radicalised prisoners with whom they can mix and communicate freely open the door for proselytisation and extremist recruitment.
Abnormally negative daily living conditions are seen by experts as a fertile environment for radicalism and violence as opposed to more normalised environments. You have taken the responsibility to lead and support initiatives on the prevention of radicalisation in prisons.

How would you characterise the existing cooperation between the EC, the member states and between member-states in what refers to the prevention of radicalisation?

I organised a ministerial conference in October 2015 to bring together justice ministers as well as experts and practitioners on the ground to exchange their best practices.

As a follow-up to the Council conclusions on the criminal justice response to radicalisation of November 2015, the European Commission published two targeted radicalisation calls under the Justice programme in 2015 and 2016 to support the development of de-radicalisation or rehabilitation programmes in and outside prisons including risk assessments tools and promotion of alternatives to detention and to develop training of judges, prosecutors and prison and probation staff to raise awareness of the risk of radicalisation.

In the area of radicalisation in prisons, there are already many actors active in developing Guidelines and Recommendations, e.g. the Council of Europe has issued Guidelines for Prison & Probation services in March 2016 and published a Handbook on radicalisation for prison staff in December 2016.

The Radicalisation Awareness Network (RAN) Prison & Probation Group is also actively working on the matter by issuing Guidelines for front-line practitioners such as prison and probation staff, psychologists, religious representatives and by organising several meetings a year on this topic.

The costs of housing growing prison populations (in some countries) are a cause for big concern; in most prison systems the prison estate is ageing and often unsuited to meet commonly agreed standards; many systems now house high numbers of foreign nationals and ethnic minorities; and public support for necessary prison reconstruction programmes is generally low.

A letter sent to the European Commission signed by several Ministers of Justice (Romania, Austria, Hungary, Slovakia, Cyprus, Italy, Lithuania, Croatia, Bulgaria, Slovenia and Portugal), expressed the view that the modernisation of penitentiary systems must rest on enhancing the training opportunities for staff, introducing effective reinsertion programmes for detainees, and providing material conditions in prisons that fully respect the dignity of each detainee.

Such co-operative action, in their view, would also support the application of EU instruments on judicial cooperation in criminal matters (e.g. the European Arrest Warrant and the transfer of sentenced persons). 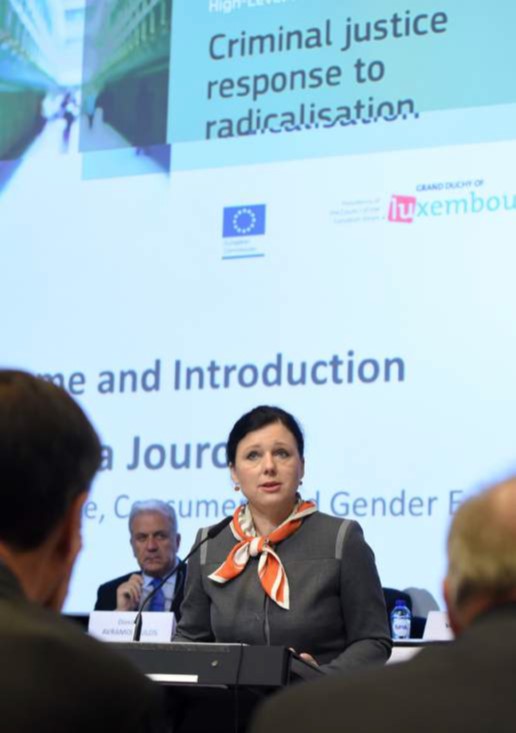 JT: To what extent can the European Commission support the member states in their investments in social infrastructures such as prisons?

VJ: In 2015 I indeed received a letter from the Ministers of Justice of 12 Member States asking the Commission to look into opportunities to support efforts to modernise detention facilities and improve detention conditions under the existing EU financial instruments.

As a result of this request, the Commission has carried out a mapping exercise to see how different EU funds could be employed to improve the situation in prisons in the Member States.

The European Regional Development Fund (ERDF) can be used under the energy efficiency priority such as for the installation of central heating, hot water, ventilation systems and isolation of windows and walls, which can directly improve sanitary conditions in prisons.

Opportunities also exist under the European Social Fund (ESF). One could think of training for inmates and staff, social reintegration and programmes enhancing employment opportunities after release.

I informed all Ministers of Justice last year of these existing possibilities and we discussed these together several times since then.

JT: In many of the Western European jurisdictions, prisons have recently been built either to improve conditions or cope with growing numbers.
The costs of such programs are significant with instances of single prisons built costing in excess of €350 million.
In Eastern Europe, where arguably the need for reconstruction is greatest, securing the funding for prison reconstruction has proved difficult.
Despite reductions in prisoner numbers from the position twenty years ago, these countries face significant problems in improving aging prison infrastructures to meet European standards.
Acknowledging that the starting point is different for each country and that there are different situations in different Member States…

Wouldn’t it be possible to develop exceptional support some countries where overcrowding and indecent prison conditions are more prevalent?

VJ: Under the current financial framework exceptional support to
the Member States is not possible. Specific funding supporting the Member States in refurbishing prisons could possibly be discussed in the context of the Multi-annual Financial Framework (MFF) post-2020. I informed all Ministers of Justice last year about this.

Prison construction programmes are known not to be solely the solution unless to be part of a comprehensive and holistic justice-centred approach that may include solutions that seek to streamline and accelerate police, prosecution and court activity; to utilise, where appropriate, custodial alternatives; seek to introduce systems of prisoner assessment and classification to allow for the most effective and appropriate use of the existing prison estate; and finally, to build such facilities to meet both accepted standards and specific population requirements.
Despite the massive investments normally involved in such social endeavours, master planning and long-term planning of justice systems is not a common practice in most countries.

How can the EC support member states adopt best practices in terms of medium-long to the long planning of their justice systems?

VJ: The European Commission assists Member States in achieving more effective justice systems since 2013 through the annual EU Justice Scoreboard by providing objective, reliable and comparable data on the quality, independence and efficiency of justice systems in all Member States.

The 2017 Scoreboard was published very recently (10 April) and it contributes to identifying potential shortcomings, improvements, and good practices. To further promote the exchange of best practices on the effectiveness of justice systems, the European Commission also meets regularly with representatives from national justice systems.

Moreover, the findings of the EU Justice Scoreboard, together with a country-specific assessment for each of the Member States concerned feed into the European Semester, the EU’s annual cycle of economic policy coordination.

This may lead the European Commission to propose to the Council to adopt Country-Specific Recommendations on the improvement of national justice systems. So far, these exercises have concentrated on civil courts, but it is currently being considered to expand it also to the criminal law area.

Finally, between 2014 and 2020, the EU will provide financial support through the European structural and investment funds (ESI Funds) to support justice reforms and 14 Member States have identified justice as an area to be supported by the ESI Funds.

The European Commission emphasizes the importance of taking a result-oriented approach when implementing the funds and has recently commissioned a study to further look into the type of projects funded by the Member States.

Věra Jourová was confirmed as the European Union’s Commissioner for Justice, Consumers and Gender Equality, as a part of the Juncker Commission, in October 2014. Ms. Jourová served as secretary and spokesperson of the Municipal Office of Třebíč, Vysočina Region, Czech Republic, and as Head of the Department of Regional Development. Entered national politics working as Deputy Head of the Ministry of Regional Development leading the European Integration Section until March 2006.